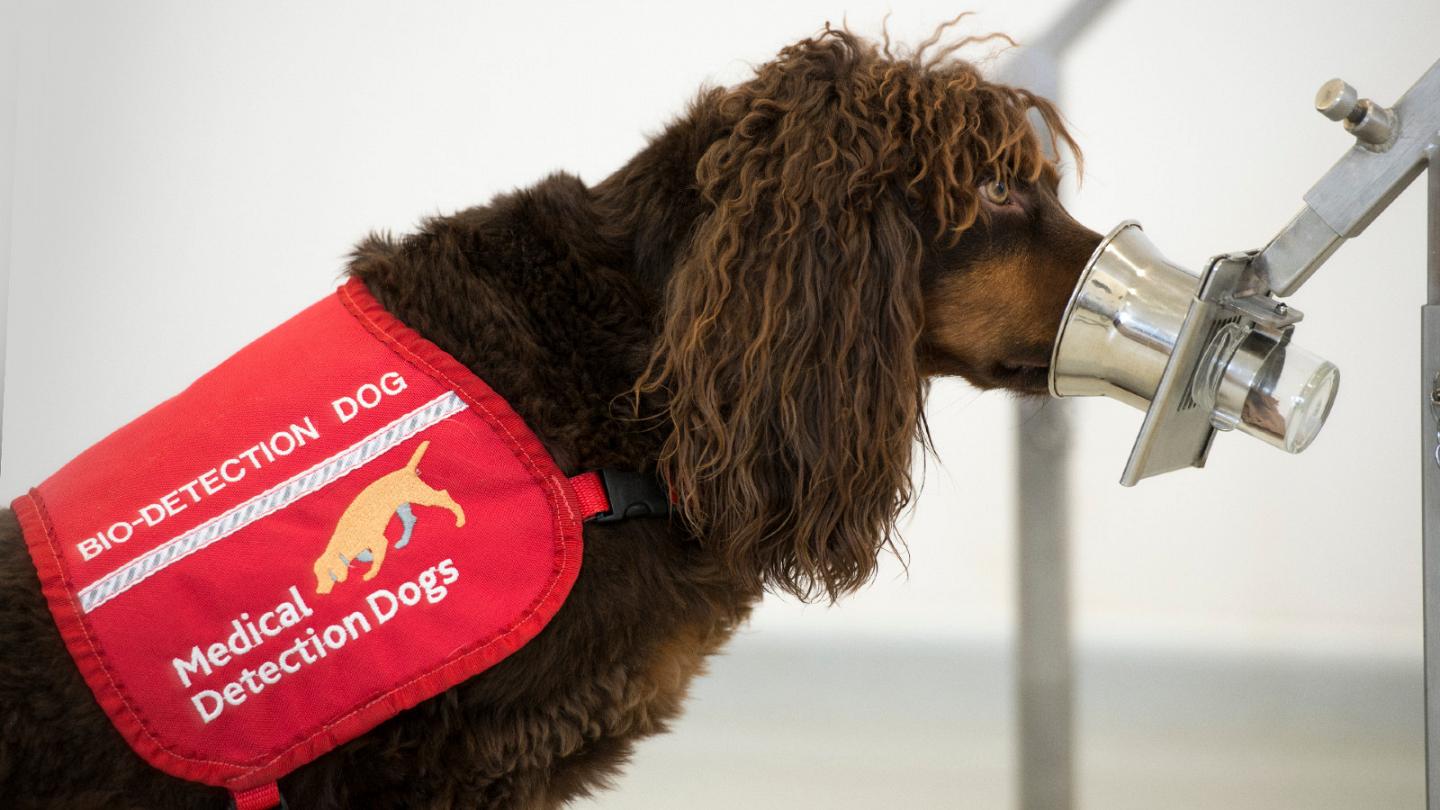 French researchers have recently published a study covering their endeavor to train dogs to smell COVID-19… in human armpit sweat. Here we present a recent article on the study published by aaha.org. Learn about why the scientists chose armpit sweat, and some of the surprising results:

A dog scents for SARS-CoV-2 in samples of human sweat at the National Veterinary School of Alfort in France. Photo courtesy of Dominque Grandjean

SARS-CoV-2 is transmitted person-to-person through respiratory droplets when an infected person coughs or sneezes. But what other bodily fluids might it lurk in?

Scientists around the world are trying to answer that question in the hopes of developing a fast-casual version of a COVID-19 test using dogs to do the testing.

Now, researchers in France have published a study detailing their efforts training dogs to scent the virus in human sweat. Specifically, armpit sweat.

NEWStat reached out to corresponding author Dominique Grandjean, DVM, PhD, HDR, head of the equine and carnivores clinical sciences department at the National Veterinary School of Alfort, to find out more.

The scientists opted for the armpit samples because human sweat contains a strong chemical signal indicating a possible pathogen in the body, and it’s easy to collect. It has the added advantage of ensuring that the dogs wouldn’t be exposed to the actual virus, which, as far as scientists know, can’t be transmitted through sweat.

Grandjean’s team conducted a series of experiments to see whether trained detection dogs can differentiate the odor of sweat produced by people infected with COVID-19 versus those who are not.

The team trained 18 experienced detection dogs, including 8 Belgian Malinois shepherd dogs, who’d previously been trained to successfully nose out explosives and colon cancer. The dogs were trained to sniff sweat samples taken from the armpits of 360 infected and uninfected participants.

Jars containing samples of COVID-19-positive perspiration were placed in a line; funnels were inserted into the jars to allow the dogs to put their noses close to the sample. During the trials, each dog identified between 15 and 68 samples. Four of the dogs achieved a perfect score of 100%, while the rest had an accuracy rate between 83% and 94%.

On two occasions, two of the canines indicated a positive result for samples that supposedly came from people who were not infected by COVID-19. Those people were immediately retested by traditional laboratory tests and both results came back positive. In both cases, the dogs were able to detect the virus a week before the people showed positive in the lab test.

The study found that “COVID-19-positive people produce [underarm] sweat that has a different odor for the detection dog than COVID-19-negative people.”

Overall, the dogs averaged a 96% accuracy rate. So how does that compare to standard tests?

According to Grandjean, “The accuracy of lab tests depends on the type of [test] and the quality of the sample.” Accuracy ranges from 70% to 95% for positive results and from 35% to 70% for negative results. “So it seems dogs are more accurate in our trial.”

Grandjean said the dogs could be prescreeners, so people who “smelled” positive would undergo traditional lab testing afterward. “The dog is reliable day after day, people can be sniffed without any intrusion, [and] it does not cost anything [besides] the dogs’ training and kibble.” Additionally, dogs can be deployed at international borders, on ships, and at large public gatherings such as professional sporting events (in the event they’re ever held again). Moreover, he said, dogs are ideal for smaller communities and countries that can’t afford mass testing.

Grandjean was unfamiliar with the ongoing Finnish study involving urine, but didn’t immediately see the advantage of training dogs to scent urine over sweat: “Better [to] sniff sweat that is more accessible and ready to use 24/7, I think.” Although he graciously added, “I might be false in my thinking.”

And despite what he alluded to as a lack of support from the French government for his team’s work, Grandjean remains committed to the idea of COVID-19 screening via sweat.

His reasoning is simple: “It works.”